At the age of three, Claire Ryan Crosby became a YouTube sensation. Her father, Dave Crosby, a musician and producer with a YouTube channel, is the creative force behind their music videos. Claire learned to speak at a very young age, and we noticed very early on that she was good at presenting. I remember some time after her first birthday she drummed her hands on our little keyboard in the living room. She started hitting the same note over and over and then she started singing the same note. At that moment I was sure that she could sing.

This led to an obsession with Disney songs. It all started with Frozen, but we also introduced her to some of the classics: she just fell in love with The Little Mermaid when we showed it to her. We bought Part of Your World for her and she asked for it every time we drove. Pretty soon she was singing the whole song word for word everywhere. One day I was having my oil changed and while I was paying, suddenly sang the Little Mermaid song while walking around the waiting room acting so dramatic. This made everyone in the waiting room laugh and people pulled out their cell phones and recorded it. This gave me the idea to put the video on YouTube. A few months later, during the Christmas holidays, we finally filmed our first video for a song from The Little Mermaid. 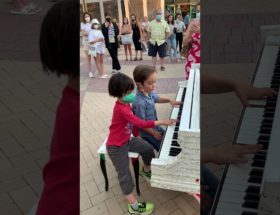